FLXMAT Engineering has developed software (FLXSOLVE) that will check the stability of the FLXMAT mattress using the environmental data from the proposed installation location. 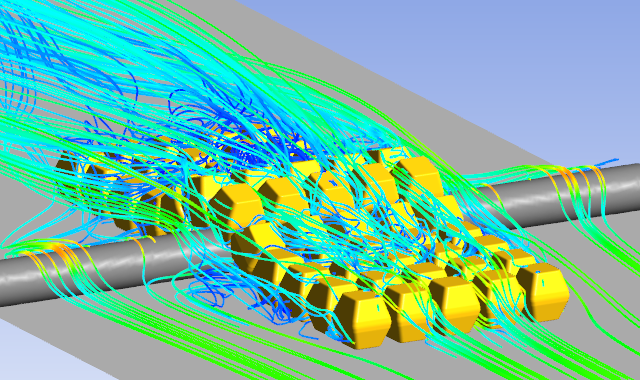 Mattress Horizontal Stability (sliding), Vertical Stability (Lift) and Edge Lift is assessed in accordance with DNV-RP-F109 and F101 and should be confirmed during the mattress selection process.

The hydrodynamic approach used in the FLXSOLVE mattress stability assessment is based on a force balance methodology. This approach contends that by using the generalised form of Morrison’s Equation for drag, lift and inertia forces and balancing these against gravitational forces, the degree of static equilibrium can be expressed in the form of a factor of safety.

HORIZONTAL STABILITY (Global Sliding).
For the analysis of global sliding failure a comparison is made of overall lateral force against the mattress-to-seabed frictional resistance.
The forces acting laterally on the system include:

When these forces act concurrently, taking into consideration of the various phase angles of the passing wave, the factors of safety against sliding are ascertained.

VERTICAL STABILITY (Edge Lift).
The single most common mode of failure for concrete mattresses is EDGE LIFT. Mattresses have been observed lifting at the edges and “peeling” from their designed location due to Edge Lift.

FLXSOLVE analyses the maximum lift force exerted on a single edge block using a combination of steady current and phasing wave forces. In addition to this the resisting force provided by the block’s effective submerged mass is considered and a factor of safety with respect to vertical stability is ascertained.

5 steps to make your own FLXMAT